SPOILER ALERT: Harry Potter and the Deathly Hallows Pt. 2 is a Terrible Movie – A Rant

The recently released and lengthily named Harry Potter and the Deathly Hallows Part 2 is the most disappointing conclusion to a 20+ hour, 10 year, 8 film series I’ve ever seen. The fanboys can’t curse me for saying so anymore. There’s no magic left here.

We begin right where the previous film (Harry Potter and the Deathly Hallows Part 1, in case you couldn’t guess) left off. Harry (Daniel Radcliffe) has just buried Dobby, an annoyingly disgusting little Vladimir Putin elf I was supposed to care about but never did. With his pals Ron (Rupert Grint) and Hermione (Emma Watson), Harry has kidnapped a Goblin to help them break into a magical bank.

You see, in the Harry Potter world, the bank only hires goblins.

And the bank is magical because DUH why wouldn’t it be?

Sounds cool, right? The gang’s going to break into a magical bank! There will probably be a big wizard fight and giant snakes and dragons and guard dogs with 13 heads and 14 tails. That would be awesome!

But first, an aside.

Harry has a few new wands and he has to ask the wand maker about them.

Why? Because how else is the viewer supposed to know wands abide by contrived rules of allegiance?

It’s really not important now, and it hasn’t been important enough to bring it up in any of the previous six books or seven films, but trust me, it’s going to come up a little later.

After Harry finishes interrogating the old man, the gang makes their way to the bank. They’re breaking in to find and destroy one of the horcruxes, the last book’s magical MacGuffins. This they pull off entirely without a hitch. A firespewing guard dragon offers nearly 12 seconds exciting of peril before the kids hop on its back and effortlessly ride it to safety.

Harry then has a vision which reveals to him the locations of the rest of the horcruxes. I consider this a lucky break for two reasons.

So the trio teleports to very near Hogwarts, the location of the next horcrux.

Then alarms go off. We get 9 more seconds of near danger before the gang is scooped into a safe house kept by none other than the brother of the recently-deceased most powerful good guy wizard. We know they didn’t know he was there because Harry is inexplicably pissed at the old guy for saving his life. Don’t worry though, this movie isn’t about to get dramatic or anything silly like that. Harry immediately decides he isn’t pissed anymore. No arguing or fighting or emotion. I guess their teleporting to his front door was a coincidence.

So they sneak into Hogwarts and… I’m bored just thinking about it. The Big Bad Voldemort shows up and initiates the Final Battle for Hogwarts. It’s all the good guys vs. all the bad guys in the fight the whole series has been building to.

Cut to the battlefield, where no you do not get to see any sweet magic action. Voldemort’s called a cease fire and a few main characters are dead so their corpses get 2 seconds of screen time each. Everyone’s making whimpering sounds.

By now I’m thinking this movie is trying to keep the children in the audience from caring too much about its characters. Even Snape, who has been a massively important  antagonist throughout the series, gets only a 2-minute flashback after his death to explain how he’s been a good guy all along. The best guy, really. And he’s in love with Harry’s mother.

This flashback comes to you via a magic birdbath Harry dips his head into after filling with Snape’s dying tears.

Remember all that wand nonsense the wand maker brought up earlier? In the final battle, Harry defeats Voldemort not with superior tactics, not by having the heart of a Good Guy, not by surviving the Avada Kedavra death curse twice, and not with the help of his friends. No, in the end, Harry beats Voldemort because Voldemort, the most powerful and evil wizard to ever life, forgot to read the fine print  in his contract with the Elder Wand. 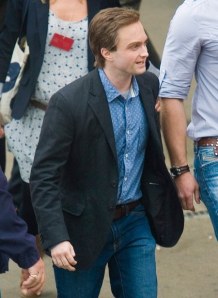 Yes, this is ridiculous.